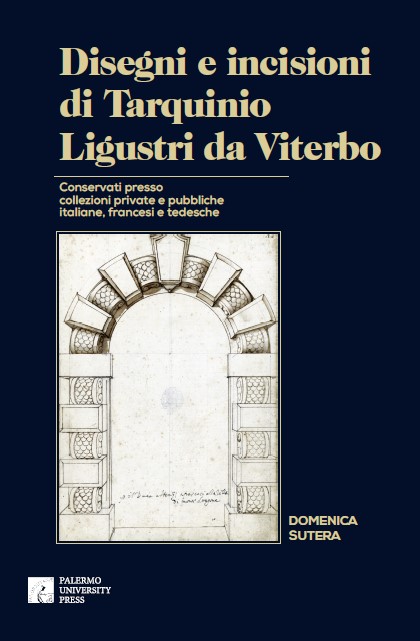 In international, Italian, French and German public collections, but also among private collections, there are architectural drawings by the quadrature painter Tarquinio Ligustri da Viterbo, made after 1596 and depicting portals of his invention. This corpus is mostly unpublished and has remained anonymous for centuries. It consists of a consistent body of preparatory drawings kept at the Kunstbibliothek in Berlin, and a small number of engravings made from them, distributed in loose form but also bound in a rare miscellaneous volume published in the second half of the seventeenth century by Giovanni Giacomo De Rossi‘s famous Roman printing house Alla Pace. The detailed examination of the drawings has made it possible to analyse the characteristics of architectural drawing in Rome between the sixteenth and seventeenth centuries and in the context of the nascent Accademia di San Luca, to reconstruct and evaluate in part the history and size of the collection, but above all to understand that it was a series intentionally intended for printing to offer portal models for reproduction. Among the goals that prompted Ligustri to undertake a substantial publishing project when he moved to Rome at the end of the sixteenth century was certainly an alternative strategy of professional advancement that aspiring architectural artists pursued through the skills they had acquired in the field of drawing and sought to publicise through the “democratic” channel of the press. Above all, Ligustri could count on the protection of Ottaviano Mascarino, whom he considered his master and, for this reason, he also followed at the academic institution. The more recent discovery of an architecture “notebook”, with some perspective sketches executed on the engraved plates of one of the most famous collections by Sebastiano Serlio owned by Ligustri, confirms the artist’s interest in a discipline similar to quadrature painting. Serlio’s volume certainly contributed to Ligustri’s education, but it also spurred him to emulate his success through an editorial project for a series of portals, which for various reasons were left unfinished. The fortune of the engravings by the artist from Viterbo, found during a first investigation carried out on Sicilian built architecture of the seventeenth and eighteenth centuries, testifies to the role of repertory of models for carving and architecture as its designer had actually hoped.